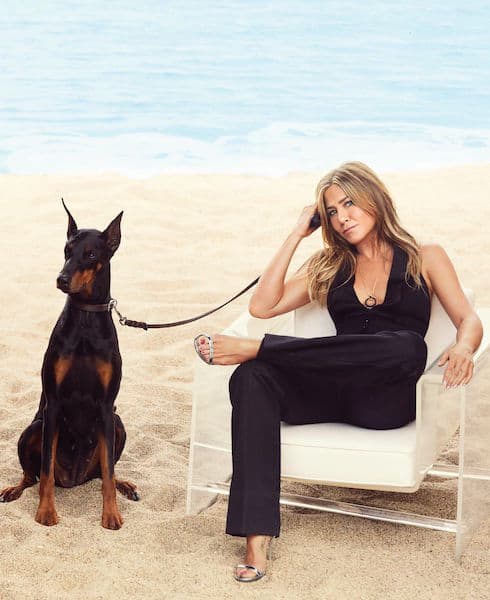 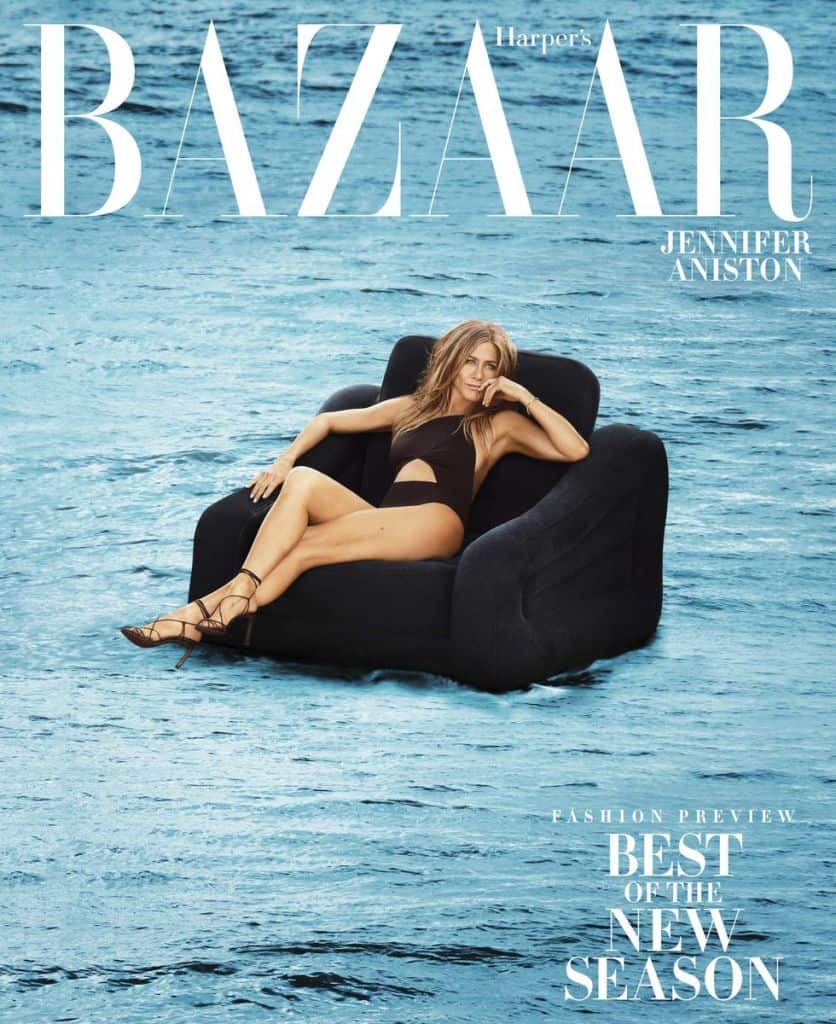 TIG NOTARO: I was at your 50th-birthday bash. Aside from my dancing, what was your favorite moment at the party?

JENNIFER ANISTON: Besides your dancing? I had so many favorite moments, I don’t even know where to begin. It felt as though there was so much love in that room—everybody from all different walks of my life, from birth until now. Did you meet Gloria Steinem?

TN: Yeah! I did one of those shows on PBS where they trace your roots and I found out I was related to her, so I ran up to her at your party and told her. I don’t think she knows who I am, so she was just like, “Wonderful.” Then we danced our separate ways.
JA: I’m sure she knows who you are. Someone like Gloria, who’s as smart as a whip, she knows who all the smart women are.
TN: It was a great party. I got to meet Keith Richards, so I had no complaints. The press had a field day with your birthday. How do you deal with that?
JA: You pay no mind to the man behind the curtain. You just tune it out. Filter your ears from negativity and assumptions, and try to live in the here and now.

TN: I remember one time I was at a meeting with you and they had all these gossip magazines in the waiting room, and you grabbed them all and brought them up to the counter, and you were like, “Why do you have this here? Throw these in the trash.”
JA: I did throw them in the trash, didn’t I?
TN: Yeah. I just love that you did that! Why would they have those gossip magazines when the people on the covers are the same people coming in for a meeting?
JA: Who work for you! And there I would be on the cover, cradling my soon-to-be-born fictional child. I do that in every room I go into, by the way. Every doctor’s office, every…
TN: Oh, so that’s a total hack move for you.
JA: That’s just what I do. I used to go to newsstands too.
TN: One person makes a difference.
JA: I sometimes think so. 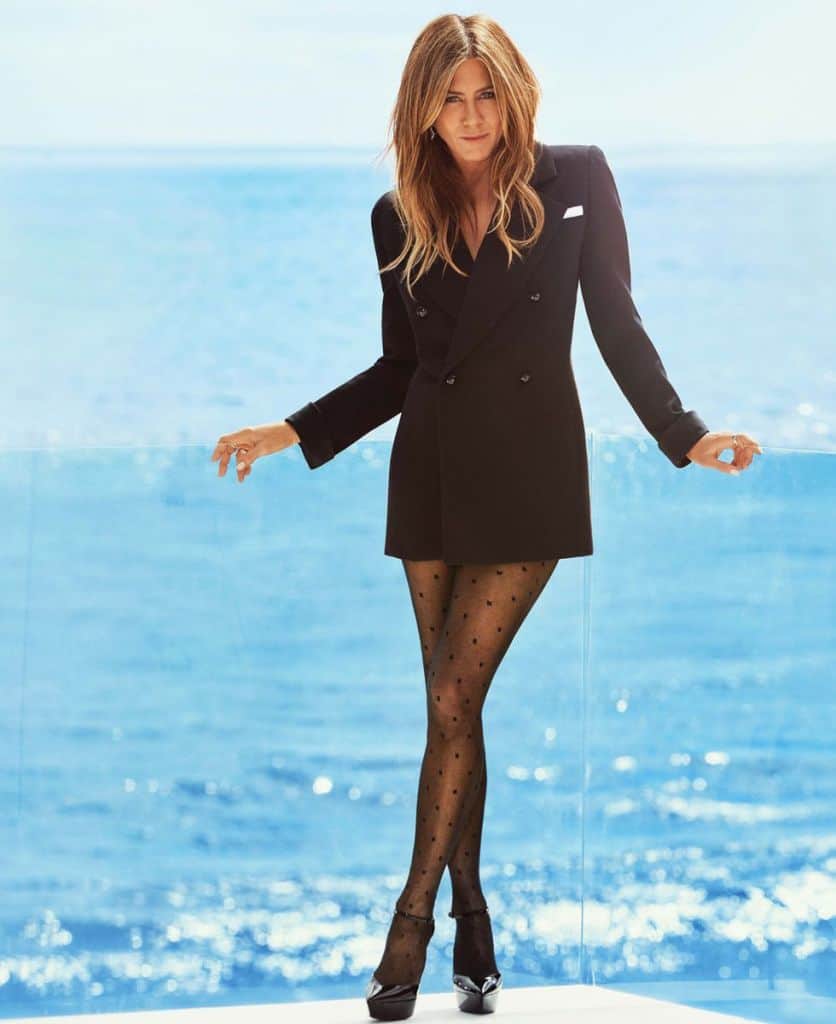 TN: Jen, with all this insanity, how do you find someone to date?
JA: That’s a really good question. Do you have any ideas?
TN: I met my wife on a movie.
JA: Well, that never happens.
TN: Before that, I dated a lot of comedians.
JA: So you stayed in your wheelhouse.
TN: I like funny people.
JA: I love funny people.

TN: So are you on OkCupid or…well, what are you doing?
JA: Am I on OkCupid? No. I have zero time, to be honest. My focus has been on the show, so dating has not been one of my first priorities. I feel like whatever [romance] looks like, it will present itself, and it’s not about seeking it out, you know?
TN: When you were interviewed recently by Harper’s Bazaar, they asked you what you’ve learned about love, and you said you “never tire of it.” Can you elaborate?
JA: When it comes knocking, it’s going to be welcomed. I’m not like, “No, I’m done with that. That’s never going to happen again.” My time on this planet has been about…It hasn’t looked a certain way. It’s my way; it’s what I’ve been given this round. But I would say I don’t find any of my past has given me a reason to harden up and create a shell or a wall of “No more, that’s it, I’m closed.”
TN: Is there anything specific you’re looking for in a partner, should they come along?
JA: A sense of humor. Strong sense of self-worth, confidence, kindness, generosity. Good people surrounding them…
TN: Yeah, that’s always good. There’s nothing worse than dating someone who has the most annoying group of friends. Do you believe in the concept of a soul mate?
JA: I think we have many soul mates. I don’t think there’s one and one only. I think we have soul clusters.
TN: Ooh, that’s good.
JA: I’ve had some of my friends for 35 years. I think we’ve all made some sort of unconscious agreement. It’s like when certain groups of people meet, they form a little soul cluster—a sort of common group of souls who have been put together. 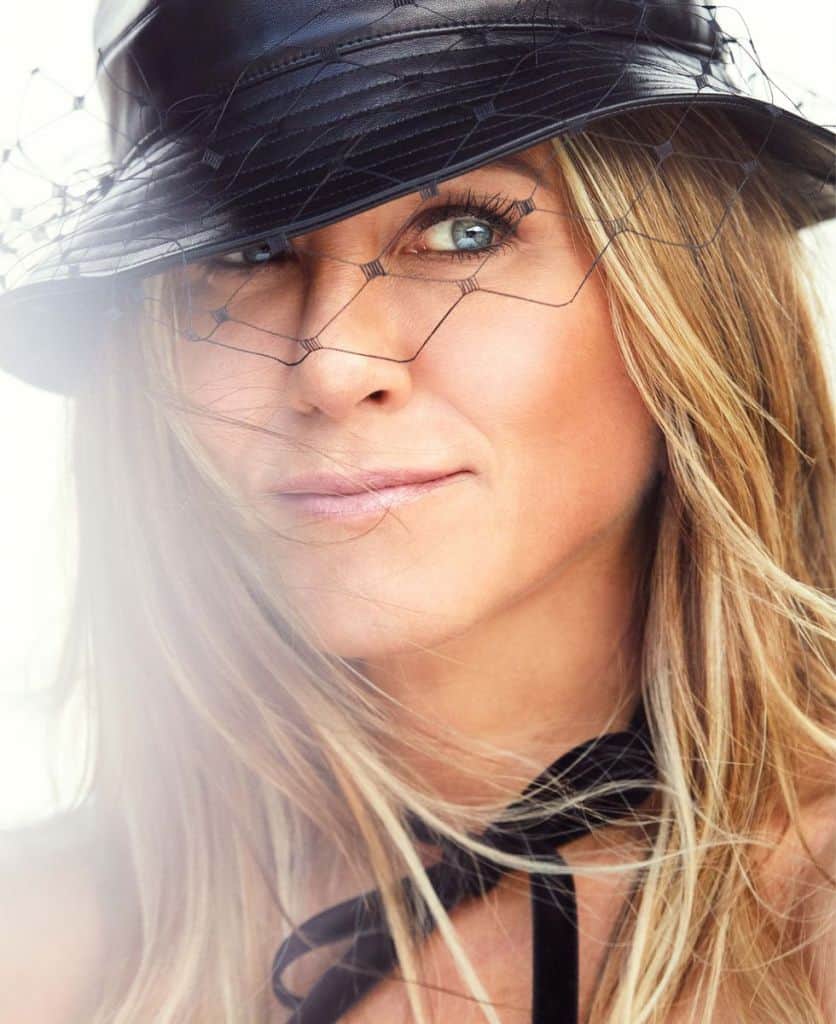 TN: If you could give young people advice, what would it be?
JA: It sounds so clichéd, but don’t worry so much. Try not to care what people think. And get into therapy a little earlier.
TN: Do you go weekly?
JA: I go throughout…depending on if there’s some stuff to unpack, which there always is. If I have time to get in there consistently, I do it once a week or every other week.

TN: So were there any surprises about turning 50, or do you feel like regular old Jen?
JA: I feel like regular Jen. But sometimes I can’t really spring up like I used to.
TN: Your knee springs are gone.
JA: I’ve had a few knee injuries, so I think the knees might need a little WD-40. Sometimes you want to spring up and the body just says, “Oh, no, you don’t,” but mostly my body feels better than ever.

TN: Okay, how often do you work out and what do you do?
JA: I work out four or five days a week. For the last two years, three or four of those days have been with my beloved Leyon, who is my boxing coach. He has given me a love for working out that I’ve never quite had before. It’s mental, it’s physical, it keeps your mind sharp. It’s something that I actually look forward to—I crave it.

TN: Okay, so let’s talk about your Harper’s Bazaar shoot. Is it true that one of the shots was topless?
JA: There was a version of an outfit that we did without a top, but I’m covering my breasticles. There’s nothing offensive out there for anyone unless they think breasts themselves are offensive.
TN: When I was 45 I went topless, but I’d had a mastectomy, so I just had scars. I was in the middle of my HBO special, and I took my shirt off. I didn’t acknowledge that I took it off. I just kept telling jokes about flying on an airplane. I’m sure there were uncomfortable people. But I was excited. I felt exhilarated. How did you feel doing yours?
JA: It felt completely normal. I think our bodies are beautiful, and I think celebrating them and being comfortable in them—no matter what age you are—is important. There shouldn’t be any kind of shame or discomfort around it. 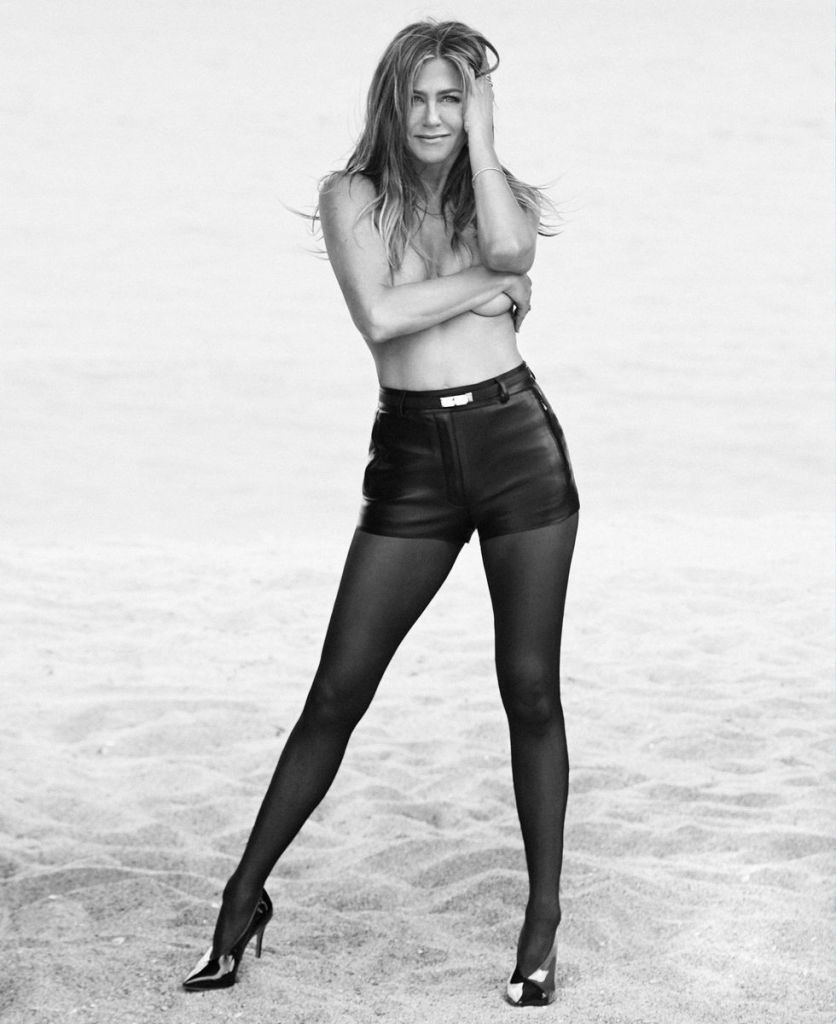 TN: You recently filmed the Netflix film Murder Mystery with Adam Sandler. That was a reteaming. How did that go?
JA: Yes, it was a reteaming. I’ve known Mr. Sandler for 30 years. We were in Italy for the summer, so that sucked. Adam, of course, always takes care of absolutely every single person, so all the families were visiting and staying in Lake Como and renting hotels and having just a wonderful little summer vacation while we got to go to work every day in these beautiful surroundings.
TN: Have you ever done a murder mystery before?
JA: No, but I’ve always enjoyed watching them myself. I love Agatha Christie and all those old-school classics.

TN: You’ve also got First Ladies in development, where you’ll be playing the first lesbian president of the United States, with me as your wife. How did it feel to take on a role like this?
JA: I think it’s incredible to be the first to play something of any kind, but especially a female president who happens to be gay. I think it’s long overdue.
TN: It is long overdue. People have been waiting a long time to see me and you in a presidential romantic comedy. And then you’re back on TV opposite my BFF Reese Witherspoon in The Morning Show.
JA: Your BFF Reese?
TN: No, she’s not my BFF. I was just trying to sneak that in casually so people would read this interview and go, “Oh, I didn’t know they were best friends.”
JA: That was beautifully snuck in.

TN: Meanwhile, Friends continues to endure.
JA: I know! What is that? It’s like a living organism that just can’t be stopped.
TN: It’s still one of the most popular shows on Netflix, right?
JA: That’s what I heard.
TN: I remember when you and I were leaving Netflix one day, word had gotten out that you were there, and there were hordes of people at the gate just wanting to catch a glimpse of you. I felt like I was walking with one of the Beatles. You were so kind and gracious to all of your fans. Do you ever find it overwhelming?
JA: Most of the time I genuinely enjoy the exchange. Ninety percent of the people are happy and excited. Every now and then you’ll encounter someone who is rude or entitled, with a “Well, you asked for it” attitude. If I’m in the middle of dinner, no, I don’t want you to take my picture. I try to have a rule: I only take photos with kids. It was a hard boundary for me to create because people get really pissed off at you. But you have to have limits. Otherwise you’ll just be standing there doing selfies on a corner for decades. 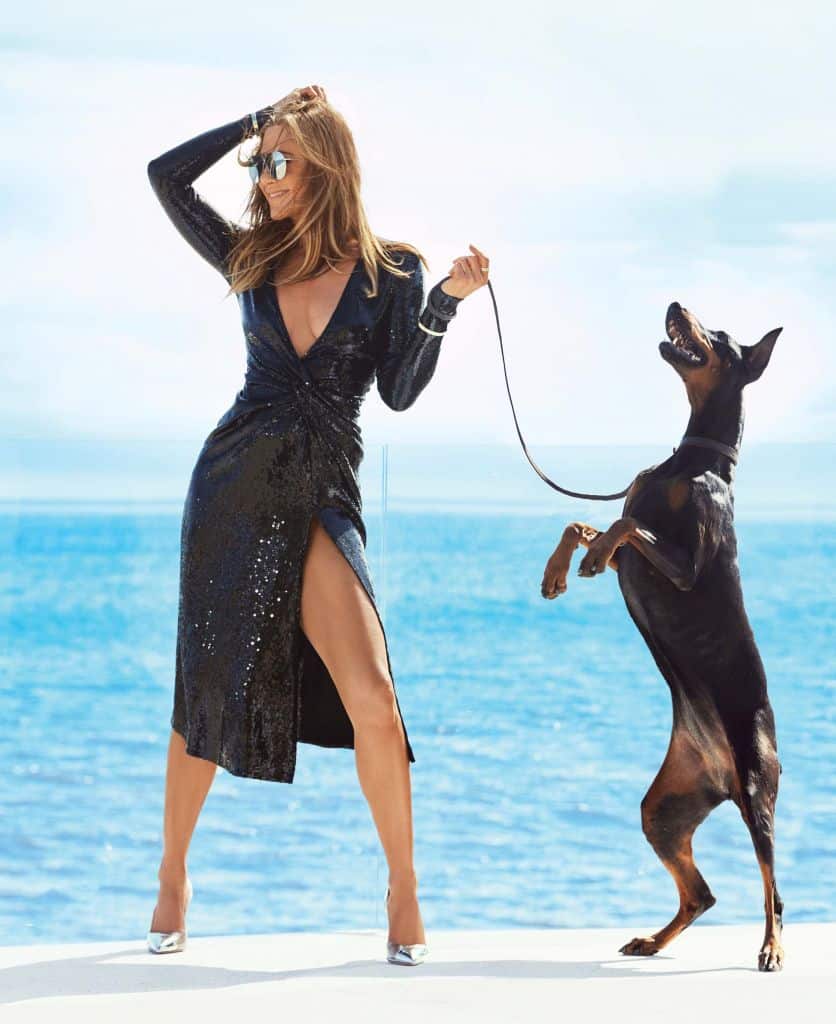 TN: If you had the option to be anonymous with what you do, would you prefer that?
JA: Yes! I literally just got excited. As if that was a box to check that I could sign up for. Then you could do all the things that…yeah.
TN: What do you want to do that you’re not able to?
JA: Oh, the simple things like…outdoor cafés.
TN: What about if we throw a mustache on you?
JA: On paper that’s a fun idea, and then in reality it’s not going to be fun.
TN: They’d be like, “Oh, there’s Jennifer Aniston with a mustache.”
JA: Yeah. Then there’s a picture of it, and then we get to live with that on the Internet for the rest of our lives.

TN: All right. Next question: Social media, you’re not on it. Do you peek at stuff, like my cat’s Instagram account?
JA: Of course. I’ll peek, or people will send me things, or they’re like, “You’re never going to believe… ” or “Oh, my God, I saw this….” When anyone ever says, “You’re not on Instagram, but you know you’re going to have to join it,” I’m like, “But do I?”
TN: No, no, no, don’t listen to that. You go in the opposite direction, and you remove yourself always from distractions in life. You don’t go toward them.
JA: I couldn’t agree with you more. Do you know what it’s like to sit in a room and watch someone struggle to put a post up, and then you’re like, “I think we’ve lost 45 minutes of our time together while you sat there and stared at a phone and tried to figure out what funny caption or what picture would be interesting. Really? For someone out there to go, ‘You know what? I don’t like it.’ ”
TN: Or they write “LOL.” That’s what you did it for.
JA: A laugh emoji. I did it for that person.

TN: Okay, I have one last question for you. If you could go back in time, what would you tell your younger self?
JA: Just wait till you’re 50. It’s going to be amazing. 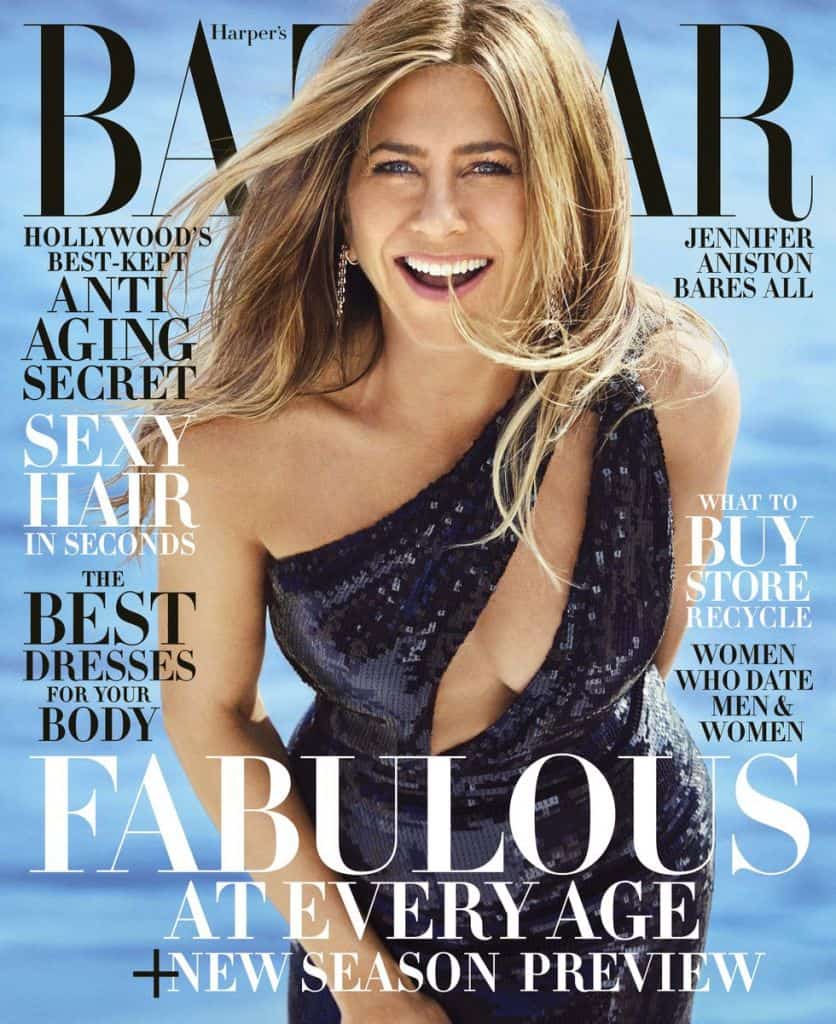