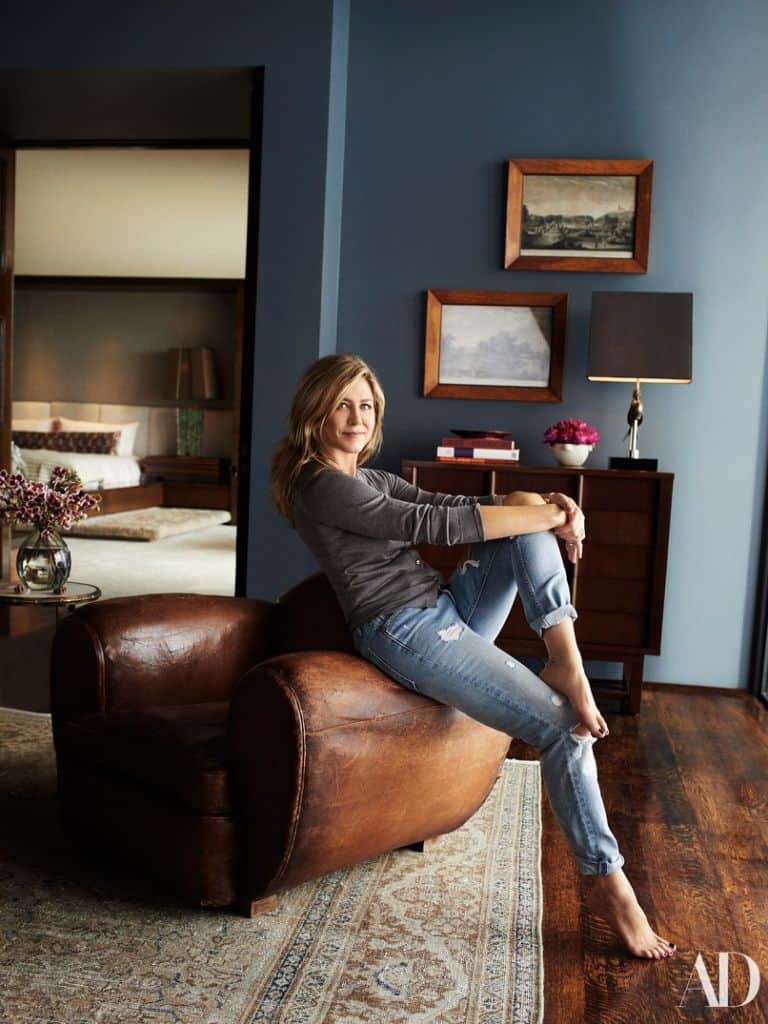 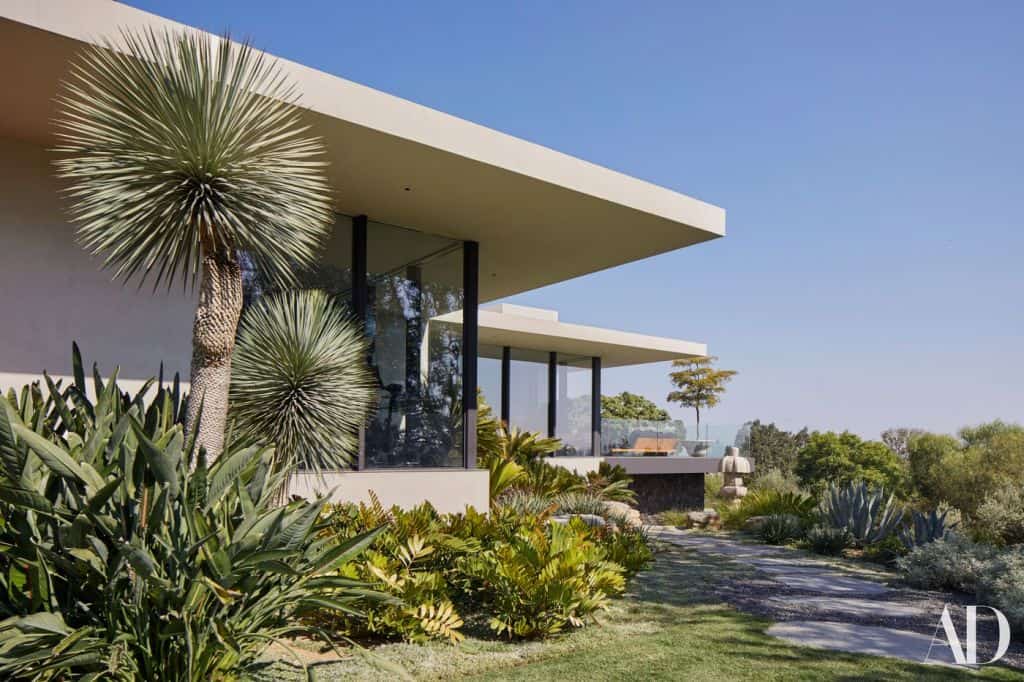 There’s a seriously imposing desk in Jennifer Aniston’s home office that looks as if it might have been plucked from the executive suite of some international conglomerate. It positively radiates authority. “I feel extremely powerful when I sit at that desk – so powerful, in fact, that I’m almost never there,” the effervescent actress jokes. Instead, Aniston prefers to work at the relatively modest computer setup in the light-filled kitchen of the Los Angeles home she shares with her husband, actor and screenwriter Justin Theroux, and their three dogs. “It’s much cozier,” she explains, “and I’m all about cozy.” It’s hard not to love Jennifer Aniston. More than two decades after the Friends star first laid claim to the title of America’s Sweetheart – a dubious distinction, perhaps, but nevertheless apt – Aniston shows no signs of relinquishing the role. She’s funny, self-effacing, and miraculously down-to-earth, especially given the insane tabloid scrutiny that has accompanied her every career move, romantic liaison, and, yes, haircut. And for aficionados of design, Aniston boasts one added attraction: She has terrific taste. 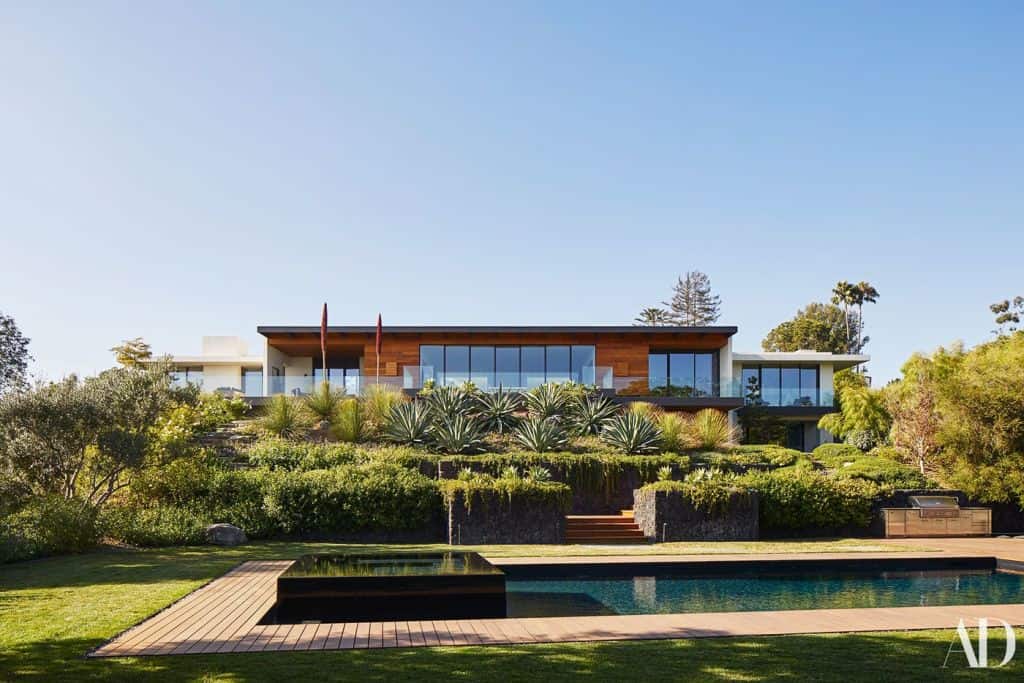 “If I wasn’t an actress, I’d want to be a designer. I love the process,” the serial home renovator says. “There’s something about picking out fabrics and finishes that feeds my soul.” Aniston’s commitment to the craft was certainly put to the test in her latest residential project, the reimagining of a Bel Air house that was designed by architect A. Quincy Jones and completed in 1965. 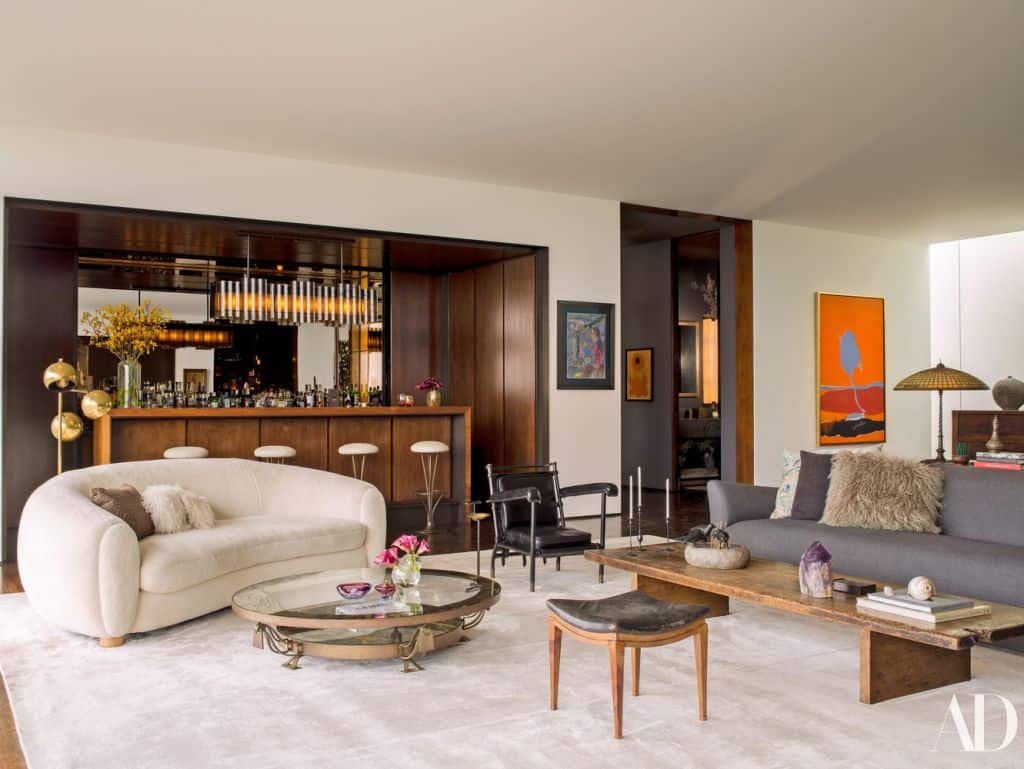 The actress acquired the property in 2011, after selling her beloved Hal Levitt–designed home in L.A.’s Trousdale Estates enclave (AD, March 2010) and attempting to relocate to Manhattan – a move ultimately thwarted by the rabid paparazzi that swarmed outside her Greenwich Village apartment building. When she bought the Bel Air property, it had recently emerged from a renovation by architect Frederick Fisher, which, despite its sympathetic embrace of Jones’s vision, skewed a bit too cool and minimal for Aniston’s taste. “It had a very dramatic entry sequence that led to this massive front door painted in Chinese red,” the actress recalls. “Aesthetically, it was the furthest thing from what I wanted, but I immediately had the sense that it could work. It’s hard to describe, but I felt a connection.”

Aniston enlisted the aid of AD100 interior designer Stephen Shadley, with whom she had collaborated on her previous L.A. home, to perform a similar alchemy in Bel Air – namely, to preserve the modernist ethos of the original scheme while softening some of its sharp lines and outfitting the interior with tactile, organic finishes and furnishings. “Jen is drawn to wood, stone, and bronze, materials that have real substance and depth. No matter how beautiful or glamorous something is, it has to be warm and inviting,” Shadley says. 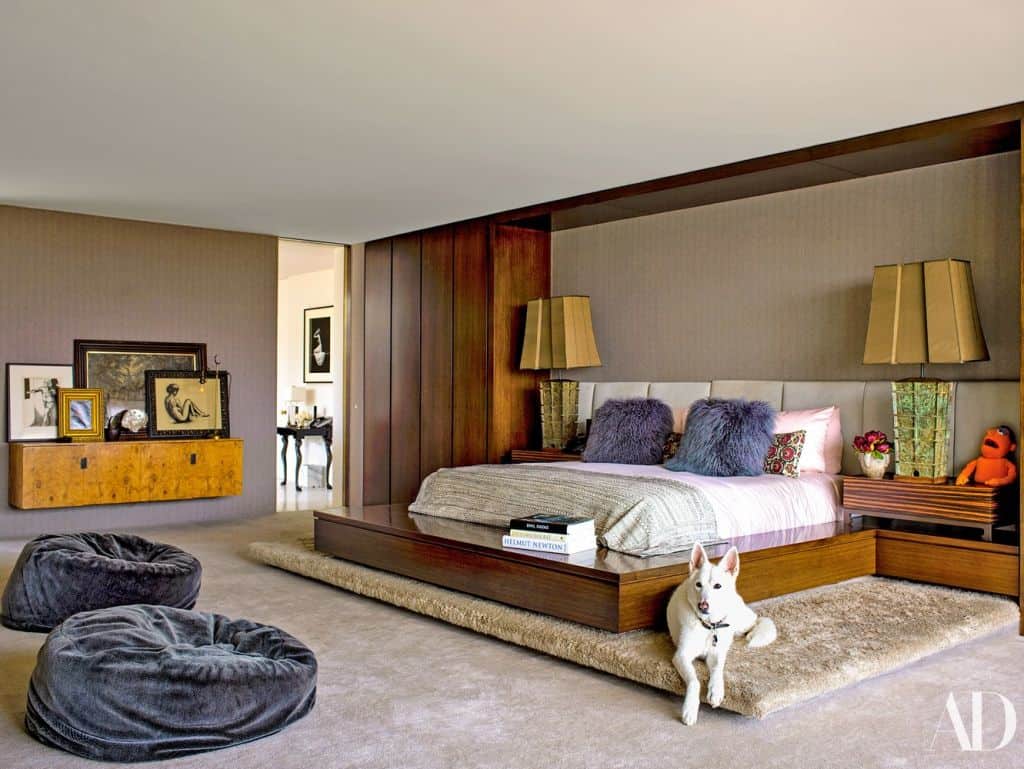 Aniston seconds the notion. “Sexy is important, but comfort is essential,” she avers, pointing as evidence to the vintage Jean Royère Polar Bear sofa, Jacques Adnet armchairs, and Mies van der Rohe daybed arranged in the living room. Aniston credits the home’s deftly layered interiors to a team effort, with important contributions by Shadley and L.A. designers Kathleen and Tommy Clements and Jane Hallworth. Theroux weighed in as well. 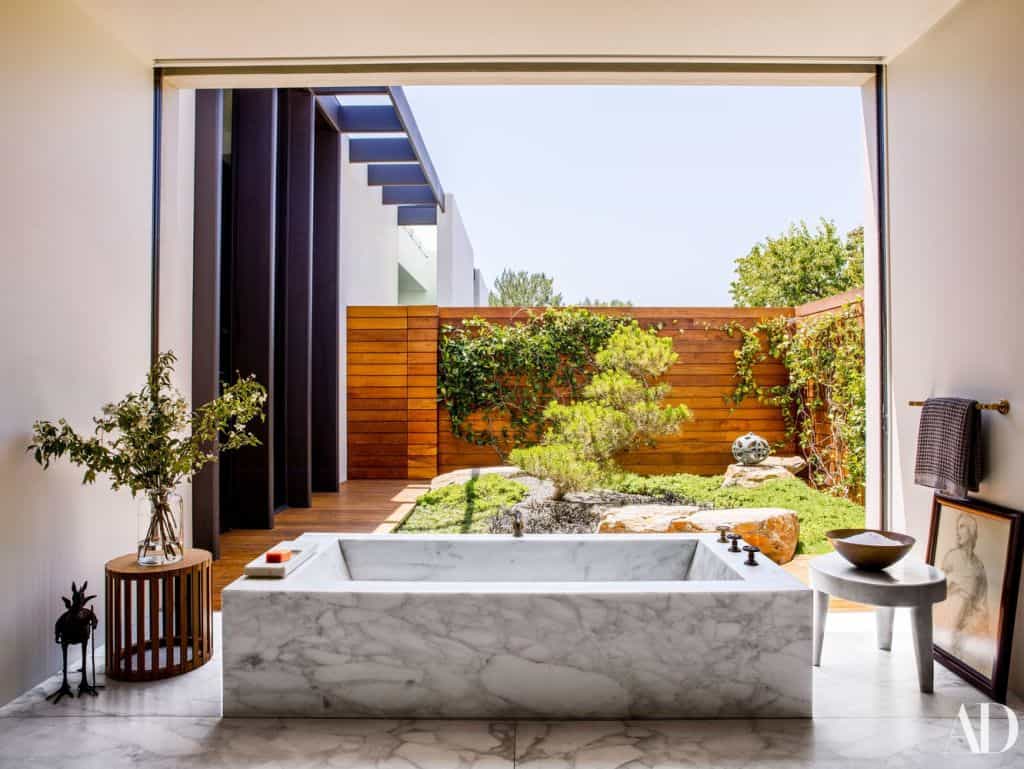 “Justin definitely wanted to be involved, so there was a bit of a learning curve for me on how to include another voice in the design process,” Aniston explains. “For instance, I figured out that immediately saying ‘No!’ to any suggestion is not the most collaborative move.” 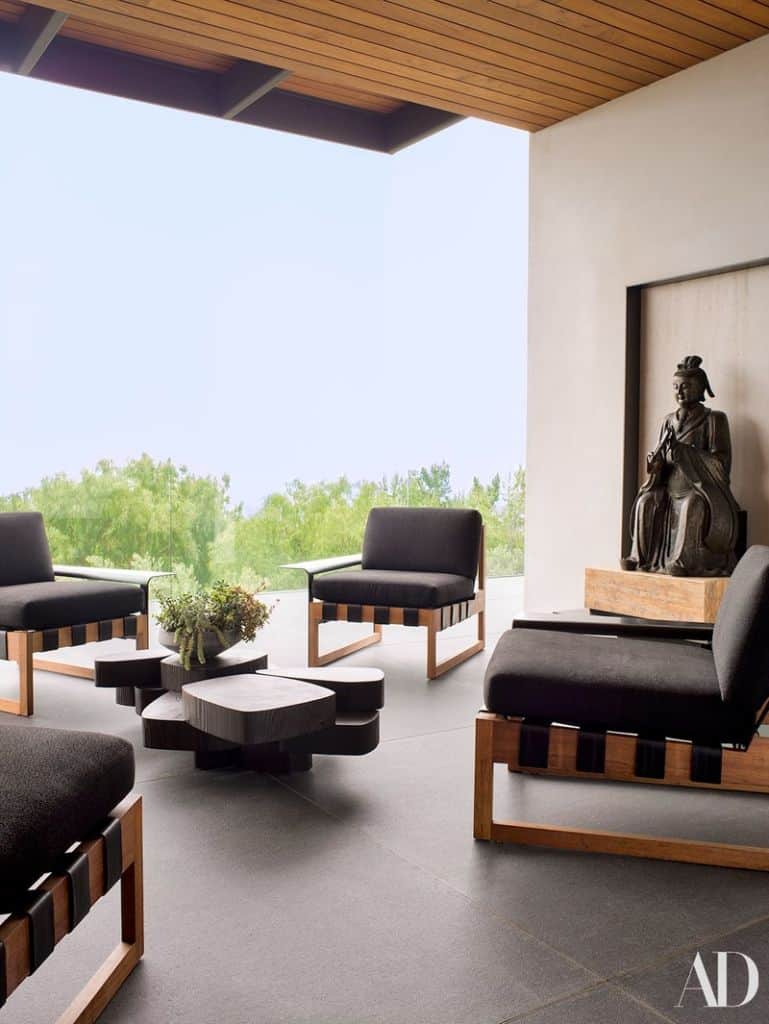 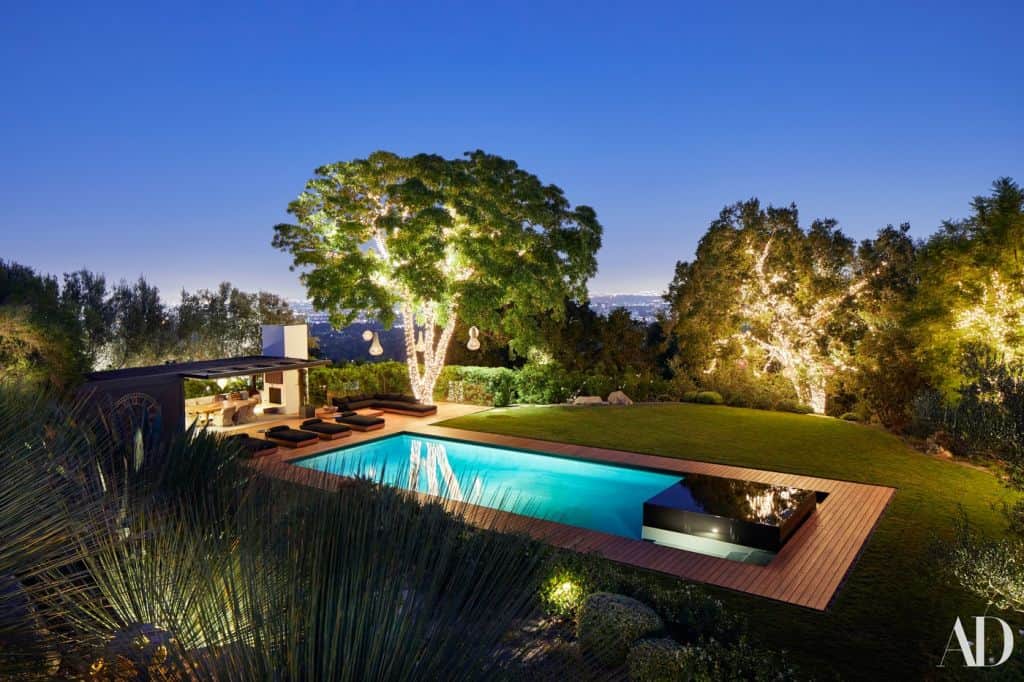 “Every corner you turn, you have an experience. Everywhere you look, you get a vista. We worked very hard to get that flow right,” Aniston says. The same imperative guided the transformation of the extensive grounds, which previously featured a hillside vineyard. Garden designer Marcello Villano and landscape architect Anne Attinger reorganized the alfresco spaces as a series of interconnected outdoor rooms, terraces, and Asian-inspired pocket gardens. Sundays at the Aniston-Theroux home are reserved for cooking and frolicking by the pool with friends, children, and dogs. “We put out a mean taco bar, and the chili’s pretty good in the colder months,” the actress says. 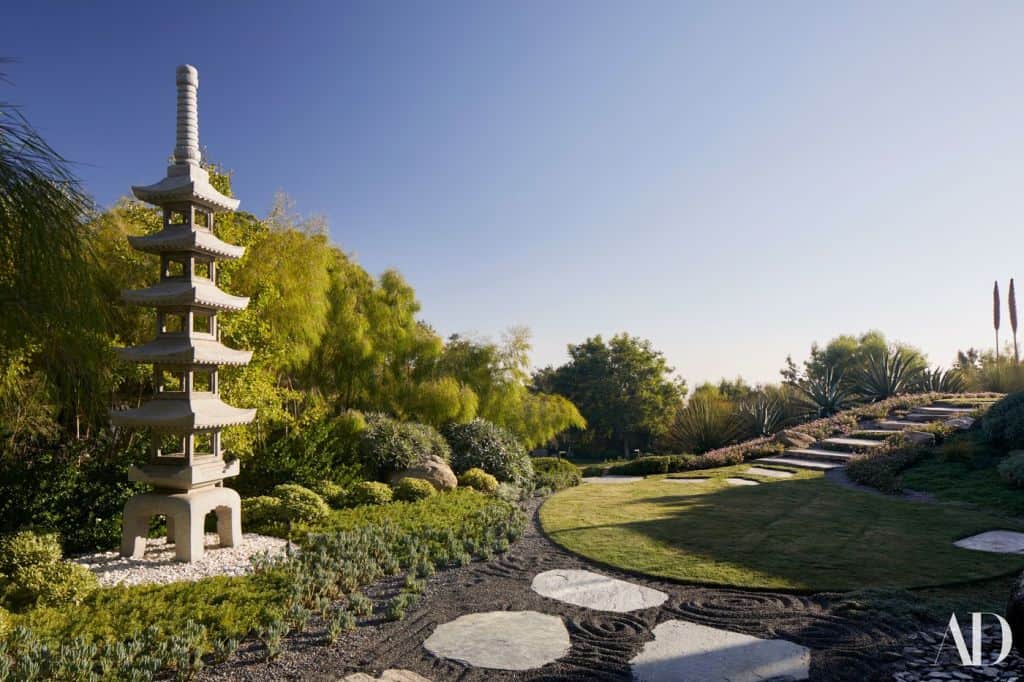 Although Aniston’s career remains as big as ever (next up she plays a former beauty-pageant queen in the indie comedy Dumplin’), the life and home she has built keep her priorities in order. “There was a time when I thought there was something romantic about picking up and trotting off somewhere different every three months. Now I’m becoming more particular about the projects I take,” she says. “I look around at my husband and my dogs and our home, and there’s nowhere else I want to be.” 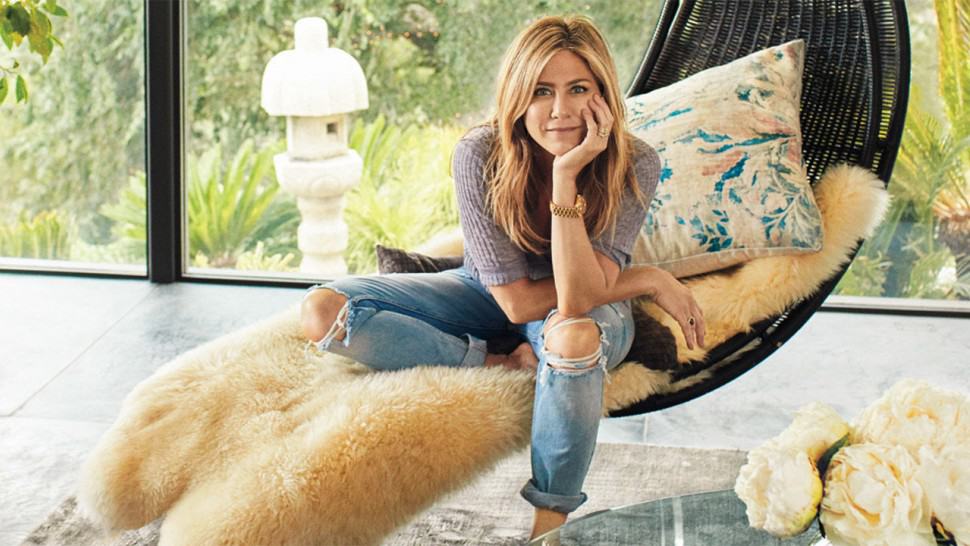 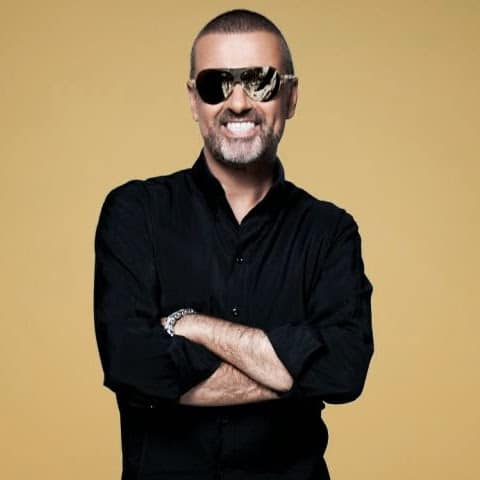 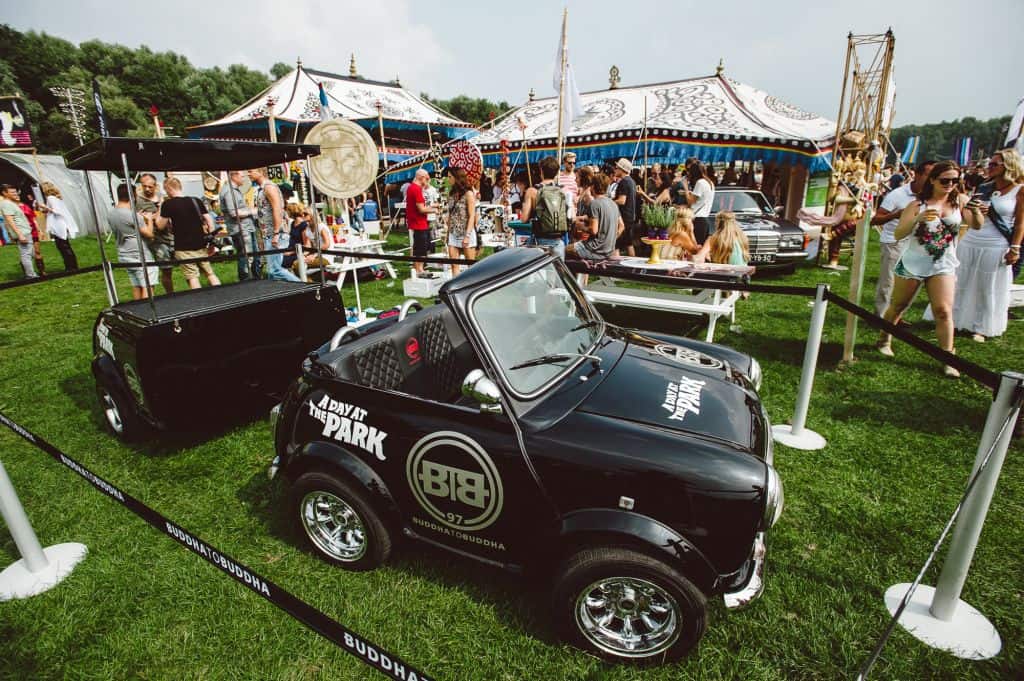 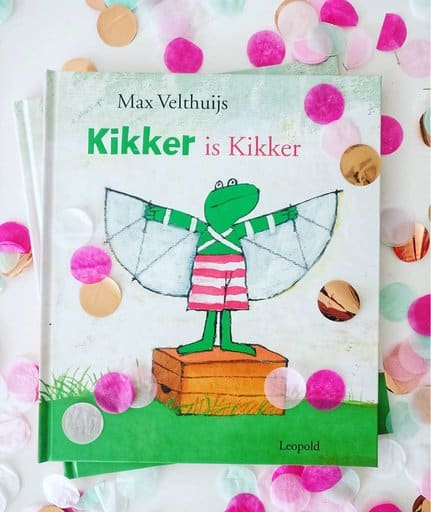 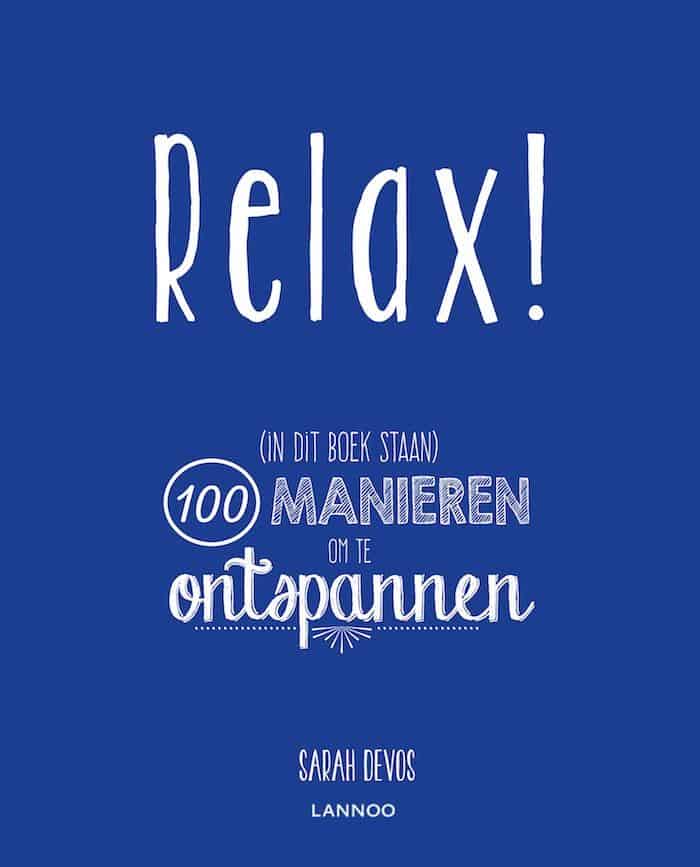 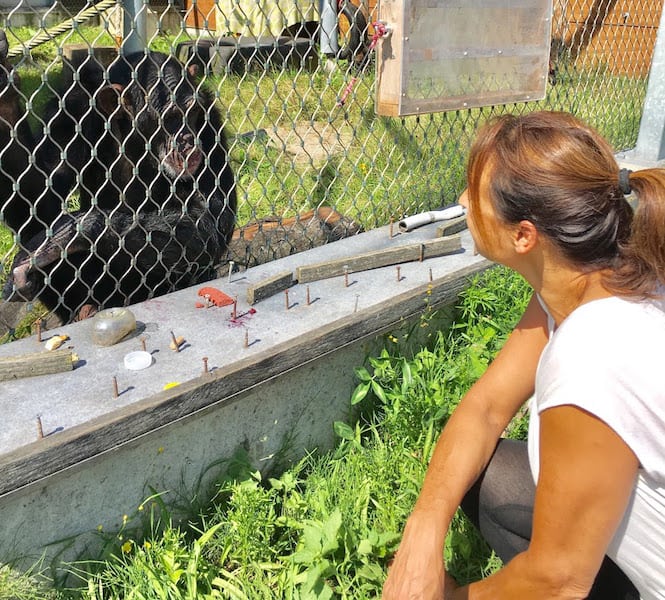 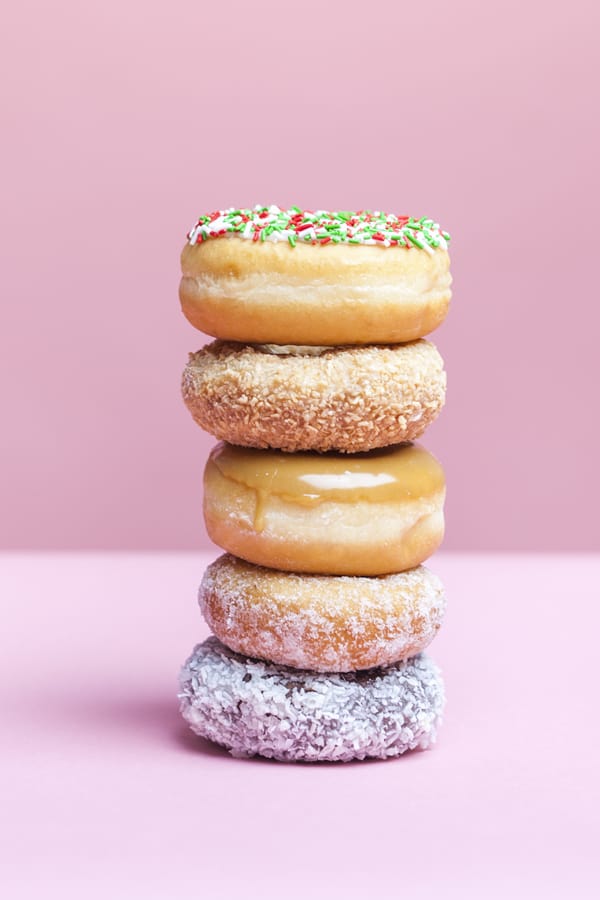